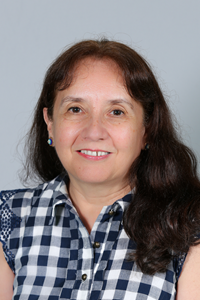 The Presidential Award is a recognition of the passion we deliver to our students throughout the years. It is a great honor to receive this award, recognizing the dedication given in teaching, collaborating, innovating, and leading students into their futures. It is also a new motivation to keep learning more every day, to keep improving as a teacher every day for our students, and to keep working with our communities to make our world a better place now, and in the future.

Laura "Juliana" Thomas has been teaching for 32 years. She currently teaches sixth grade at The Exploris School, where she adds science expertise to her team through integrated curriculum and project-based learning expeditions. Juliana collaborates in designing class projects and her goal is to develop critical thinking skills in her students. She is passionate about using citizen science in the classroom to help studentsthink of themselves as authentic scientists. She has collaborated with the North Carolina Wildlife Resources Commission and Museum of Natural Sciences, designing citizen science lessons as students track turtles and collect fossil shark teeth data. She is also coaching Wake County teachers in leading citizen science after school programs. Juliana has been the recipient of many awards with her bridge building club. She received first place in the 2013 International Kids Creating Community Contest for her work with her students and Eastern Box turtles. She has presented her turtle work at several conferences, and became a 2014–2015 Kenan Fellow, where she worked with the Students Discover Kenan Fellowship program. Juliana earned a B.S. in biology from the Universidad Nacional de Colombia, and completed a master’s degree in biology at the Universidad de Los Andes in Colombia. She obtained her science teaching certification at North Carolina State University.