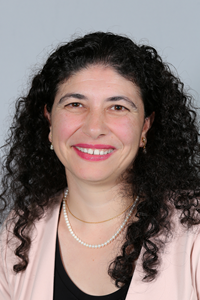 Receiving the Presidential Award for something I am passionate about is an honor and an extremely humbling experience. My goal as a STEM educator has always been to motivate my students to realize their full potential. This award validates my dedication and perseverance, and motivates me to continue on my path as an innovative educator. The Presidential Award is a testament to the support and guidance I have received from my administrators, colleagues, students, and most importantly, my family.

Delara Sharma has been an educator for 22 years. She joined Piñon Elementary School in 2008, where she currently teaches all subjects to fifth grade students. As an Inquiry Science Education Consortium Science Instructional Coach at Piñon from 2011-2015, she helped implement an inquiry-based science curriculum. Delara began her teaching career at Father Agnel School in New Delhi, India. Delara serves on the Santa Fe County Spelling Bee Committee, Santa Fe Public Schools (SFPS) Science Fair Committee, and SFPS Digital Advisory Committee. She coordinates Piñon’s annual science fair and spelling bee, in addition to various STEM programs. She also coordinates a schoolwide Hour of Code, and runs an afterschool Coding Club. Delara is a trained facilitator for WestEd’s Making Sense of Science and FOSS curriculum modules. She has facilitated professional development for the New Mexico Public Education Department, SFPS faculty, and at the New Mexico STEM Symposium. Delara earned a B.A. in English from the University of Delhi, a B.A. in education from Indira Gandhi National Open University, and a M.A. in sociology from Pondicherry University in India. She achieved her National Board Certification in 2011. She also holds a kindergarten through eighth grade teaching license with endorsements in reading, TESOL, and gifted education.