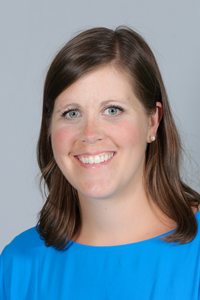 Being a Presidential Awardee is such an incredible honor. It justifies a genuine connection I've developed between my deep commitment to learn about high-quality science teaching and an insatiable drive to have students love the learning of science. It also recognizes everyone who has influenced me as a teacher. I am completely humbled by the fact that the seemingly small impact I make with my students is actually much larger than I could ever imagine, and I am eager about what lies ahead.

Gretchen Brinza has been an educator for the last 15 years, teaching fifth and sixth grade science for the past three years at Alcott College Prep East Elementary Campus. Previously, Gretchen taught various elementary and middle school STEM classes during her tenure in the Chicago Public Schools. Gretchen’s passion is having students think of themselves as scientists upon entering her classroom. With her guidance, students drive their own learning and accept that failure is a necessary part of learning. She teaches students that science is everywhere, and the problem solving approach in which they engage is invaluable. She is the recipient of many awards and grants, each one pushing her and her students in their learning. Gretchen has led science professional development at the local, district, and national level, most notably as Illinois adopted the Next Generation Science Standards. With this shift, her work as an author and pilot teacher for multiple storylines within the Next Generation Science Storylines project has been the most influential in her practice. Gretchen earned a B.S. in elementary education with a mathematics minor from Susquehanna University and a M.S. in public service management from DePaul University. She is certified in kindergarten through ninth grade elementary education, endorsed to teach science, mathematics, social science, and language arts.